I’ve been trying to take some needed time off from CPS data for just a few weeks (first time in a year!), but it is difficult to stay away from this conversation.

I’ve been following the CPS Budget Hearings on Twitter. I’ll focus on the one that would have been my budget hearing…the northside hearing with Tim Cawley. At that hearing, he asked the audience (parents and teachers) to suggest their own budget plan if they were unhappy with the one being presented.

Let’s put aside the fact that the Board, Central Office and the City are trying to play budget catch up from being given these pension holidays where they have been paying less into the pension than is fiscally responsible. In order to divert this money back to other budgets within the City **

It may have been technically legal, but it was ethically questionable when:

a) the District had been a party to agreeing to these pension benefits and teachers are prevented from contributing to Social Security for those same years;

b) have admitted that the pension shortfall is more about declining investment returns that did not meet their assumptions (see WBEZ interviews);

c) have decided to make this generation of CPS students “pay” for their lack of foresight within the span of 2-3 years.

My child can’t “do over” second grade, and this makes me frustrated as a CPS parent, but I digress.

Okay, the Board would like an alternative budget submitted from a CPS parent, here is one.  Quick and dirty, back of the napkin-type stuff because I promised my kids I wouldn’t be working these last weeks of summer and make up for being absent most of the last 11 months.

We need to find at least $417 million in cost savings (the difference between last year’s Pension & Liability Insurance and this year’s costs).

It is difficult to actually create the detailed alternative that I would like to submit because CPS has not released the strategy/projects reasoning in detail behind some of the increased costs at the Central Office and Citywide levels.  I could do more with the following information:

I would think that if they are making a good faith request that CPS parents submit their own ideas, that they would release this data without needing a FOIA (Freedom of Information Act request).  I would like to be correct about that.

Here is my suggestion for moving money within the budget based upon the total dollar amounts given for CPS for FY2014. I would also suggest that the City move to seek increased revenue, either through taxes or TIF rebates, because even the President of the United States did not want to bargain with Congress on the budget without cost-savings AND revenue on the table.

Specific factors driving the first version of the Apples2Apples suggested budget for CPS:

This means that the budget is affected in these broader ways for FY2014, and with more data I can offer more details:

If they would like to keep their current level of per-pupil budgeting, here are the additional obligations of Charter and Contract schools that creates District equity. Otherwise, they forfeit their budget allocations and contracts with the District:

So, again, allocate revenues to expenses in the classrooms first and work out from there:

If the Central Office and/or City Wide departments find that they are unable to support their operations through these dramatic cost-cutting measures, the Board can turn to external sources of funding, volunteer resources, and support to help them meet their administrative goals.

Or, the Board can negotiate additional revenue from the City.

Or, the Board can go back to corporate TIF beneficiaries to obtain donations from them to close this budget gap.**

Or, the Board can negotiate to have their pension gap closure budgeted across two years of Central Office/CityWide cuts and just do less at the strategic level until these obligations are met and paid for.

Or, the Board can loosen the restrictions imposed on LSC’s and Principals that make them unable to use non-District approved sources for obtaining technology, new playgrounds, etc. If they are the ones having to make their budgets with fewer resources, they need to be given even more purchasing/donation flexibility.

Looks like they have some options here.  Would love to get more specific numbers to you all on this, but today?  I am going to be sitting with my kids and be present with them.

**Look, the creation of these TIF Districts clearly channels money AWAY from CPS schools that would normally be going to school revenue. investing in stable, quality, community-anchored schools is JUST as critical to the well-being of the City of Chicago and revitalization/stabilization of neighborhoods as investing in sports arenas for private universities or hotdog company headquarters.  Would we be in this situation if the $250 million~ channeled away from public education each year had been available instead? I wonder.

You can’t use TIF to tote job creation while cutting 3,000 school-based jobs because TIF has skimmed revenue off of budgets and call it “net job creation”. Jobs for who, exactly?

What will we channel taxpayer money away from next in order to give to private entities?  Channel money from police departments, fire departments, public works?  Let’s just stop this TIF shell-game.

***Yes, I know we need pension reform (starting with Daley, yes? So tired of politicians and corporations using the City and schools as their ATM) but I have yet to see the detailed concessions or proposals from the CTU OR the District.  You can gripe about it all you like, but unless we have specifics to talk about AND agree that revenue AND benefit-changes are on the table? We are getting nowhere. 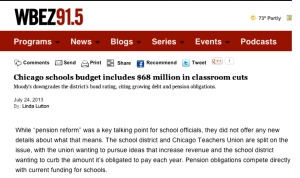 One thought on “An Alternate Budget Plan from a CPS Parent”