With space utilization such a hot topic at CPS right now, of course it makes sense that some of you would be curious about how I arrived at my conclusion that the CPS Space Utilization formula from 2011-2012 was incorrect and misleading as to the number of under-utilized elementary schools in the Apples to Apples Elementary Data set.

Each elementary school page on the CPS website has that school’s Space Utilization Report for 2011-2012 listed as a downloadable PDF.

This CPS provided report tells you the following: 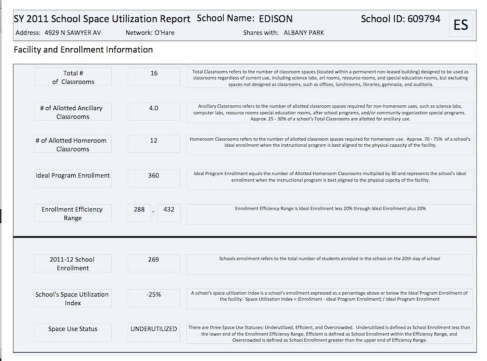 Bottom line?  I got the numbers from CPS. They are not the most current numbers because those numbers have not been released as of December 4, 2012 at 12:38 p.m.

I’m not sure who was responsible for gathering or giving the information on each school to CPS.

I have walked through two schools and compared the classrooms to the numbers on their 2011-2012 reports, they were pretty close (and I’m not sure if the use of some of these classrooms have changed since last year.)

The formula for calculating the number of ancillary classrooms for each school is reported in the CPS Space Utilization guidelines as follows:

This is significant because the fewer homerooms you have, the fewer students you are required to have enrolled in the school and still be considered “efficient” by CPS.  So under-reporting potential homerooms can make an underutilized school appear more efficient according to CPS’ formula.

To give CPS the FULL benefit of the doubt, I corrected for under-reporting of homerooms in my “adjusted formula”.  This increased the potential number of schools that were considered as under-utilized under the old formula.

Question: What WAS the formula that CPS uses to calculate IDEAL enrollment in 2011-12?

The formula was relatively straightforward:

Question: Where did this 30 students number come from?  I thought CPS Guidelines on Class Limits were 28 students in K-3rd grades and 31 students in 4th-8th grades?

I can’t say for sure why they used 30 as the number in the formula because I haven’t confirmed this with CPS.  My best guess is that they arrived at it this way:

Question: So, what is the problem with this formula?

This is a bit more complicated, so bear with me here.

The 2011-2012 CPS formula used an average of 30 students per homeroom as their IDEAL enrollment for the school.  (If that is true and they keep to their own limits, but that is another story for another day. See Apples to Apples Class Sizes Dataset here.)

CPS used a RANGE of efficiency in 2011-2012 to determine school enrollment. Which means:

After the top of the range was reached? CPS considered a school officially overcrowded.

After enrollment went under the bottom of the range? CPS considered the school officially underutilized.

The problem with this formula was that it set a NEW maximum for the average number of students in the classroom BEFORE CPS considered that classroom (and school) to be overcrowded.

So CPS did not officially consider a school overcrowded in 2011-2012 until it had an average of 36 students in each homeroom.

Now, let’s explore the effects on under-utlization and determine a formula more in line with the CPS classroom limits in PART 2…